You fail to see my point. TDK's themeing failures are not safety concerns. Chunks of rockworks falling off are. Trust me if that happens SF will remove skully long before even considering redoing the rockwork

With the park most likely shifting direction with the new hotel complex I feel as though they can't afford to let a ride like Skully go. Maybe when the new hotel is built, the park will have a higher budget to upkeep everything. With a major influx of guests coming in, they're going to need all the capacity they can get and Skully has a capacity of about 3,000pph. I think we're going to see continued patchwork until its no longer good enough. When that happens, they'll get rid of Skully. Until then, I believe it's safe.

That whole hotel complex is not money coming from SF at all. Its Jackson township trying to geninvestors together to make it happen we dont know where the money will come from yet

I never said that it was Gadv putting the money in. I'm saying that because of the park now being more of a "destination", SF might invest more into the upkeep of the park and that they need all the capacity the can get because the the influx of new guests.

If you want to put that way, Skully's presumed dangers could be managed, mainly as a priority, if the park plans to move to a more attractive approach to keep guests amused.  Then again, TDK could very well get its effects back.  Yet, out of the three coasters that include large effects (Bizarro, Skull Mountain, TDK...Green Lantern uses mist and the Paralax cut through but it is not large scale nor does it cost a lot as compared to the latter 3), we have seen Bizarro renovated to get rid of the audio, which is a plus for capacity and the riders' ears, used the flames sparingly and at night, keep the shield lights on at night, and keep the auger working and spraying at all times.  Skull Mountain currently has multiple props, blacklights for some the props, the music, and the strobes at the end.  TDK, which had the most effects as compared to all of them, now has a pre show room with too many dents on the doors from the operators banging on it to scare guests, AC troubles, no holograms, no blacklights, no projections, barely any sound effects, lost it's photo booth and photo op, and has the non operational bus at the end.

You can look at it two ways, if this hotel goes through, either enhance/change/fix the props to entice new visitors and keep the ride that we all believed could have been a stepping stone to retheming and reviving Movietown or cut the losses and bring in a whole new ride, a coaster most likely, for that area and advertise the hell out of it to bring more crowds.  I don't know off hand which is statistically and financially a better move, but I feel if the park is pushing to make a better appeal to new guests, something must to done to TDK or else it will be heading to the chopping block.

I will say though, for the safety of everyone, the Skully situation is a priority because it is possibly detrimental to the park.  I'm not denying that.  I don't want a rock to fall on my head either.

Yes, It does clear up a decent chunk of land, but you already have a larger chunk of land available and a few other small pieces that are nothing more than vacant eyesores (in blue). Where the land taken up by thunder becomes valuable is if expansion of the park was to wander into the giant chunk of cleared land THAT NO TREES HAVE TO BE REMOVED TO UTILIZED directly behind it. If thunder goes, its to expand into the safari. I don't know where SORA is, but im sure it can be rerouted to the back end of the safari if its in that part behind thunder. Long story short, I'd say the blue should be higher priority. There is atleast SOMETHING where rolling thunder is. There is nothing (except the vacant chiller buildings and the stunt arena) in the blue. I mean, THERES ALREADY A STATION in the blue. I wasn't trying to disprove your point about which area should be attended to first, by no means do I want Rolling Thunder to go and by all means Movietown and Old Country need the love in that area.  I was just stating the area that Rolling Thunder covers does give more room for what we have been hearing about the drop tower on Kingda Ka as well as room to restructure that area to make it accessible and enticing once again.

I do want to point if Rolling Thunder is removed, both sides could have an open station. 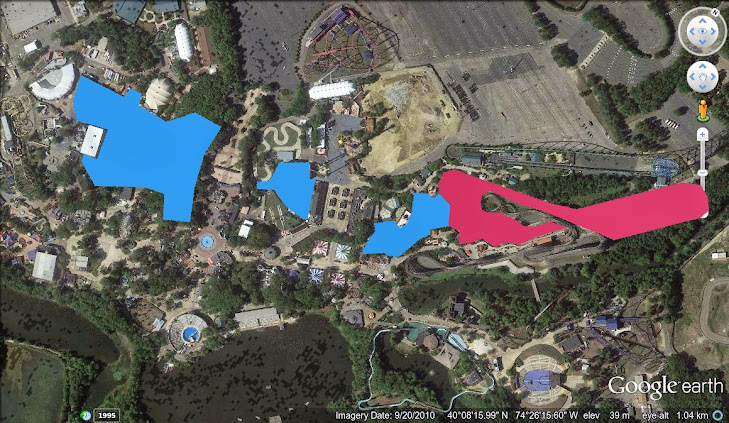 Anyway, I have a new scenario for next year. Say the park removes Rolling Thunder and builds a new section of the Golden Kingdom with a drop tower. The park would be lacking a second woodie which opens up to door to 2015. Could we possibly get the long awaited Jersey Devil in place of Old Country in 2015?

In my opinion, the chain would lean towards an Iron Horse, especially in a flagship park, over a new woodie (a GCI most likely) unless a woodie is moved from another park in the chain, which I doubt would happen.  RMC already has be remade one coaster, built another, and is rumored to be remaking two dueling woodies (American Eagle, which is most likely happening for 2014, and Colossus, which could be set for 2015-2016). The Jersey Devil thing, that's fair play, but I guess that goes with "dream" pile with the giga and wingrider/4D.  Something tells me that we may not see a new coaster 2015.  Technically, 2014 was suppose to be the year the park gets it (based off of a usual pattern and it also being the 40th anniversary) but it is all but shot at this point.

I rode Rolling Thunder for so long as our only wooden coaster, wishing for a second that I do not want to see it go. I'm for a third wooden coaster, a family one, just beyond Seaport and next to Congo Rapids.

If we are getting a wooden coaster, it can't be a hybrid due to the lady who fell out of one in Texas. I think after that Six Flags is done with those for good.

If we are getting a wooden coaster, it can't be a hybrid due to the lady who fell out of one in Texas. I think after that Six Flags is done with those for good.

That won't stop them.  Yes, they are cautious, but we have seen them reopen Iron Rattler following the death at SFOT with new seatbelts as a secondary restraint.  The chain still has its talks with RMC, as rumors have been flying in left and right about 4 different coasters in the chain possibly getting the renovation.  They might err on the side of caution for next year's additions, but they'll put in plan B and leave it on the back burner for everyone to speculate about.

^^^ Plus, they will most likely redo Medusa at Six Flags Mexico for next year or at least soon. They are definitely still with RMC.

If Chicago is getting a fourth woodie, save my second woodie here and give me a third!

The local paper had a story saying it's wooden at SFGAM.

The woodie is not very promising nor necessary.  El Toro is still relatively new (by no means is it brand spanking new, but it's not even in the double digits yet).

What Lance has said on Screamscape seems to be basically what I have been saying for next year and a bit of what we want and don't want for 2015.  Maybe the rumor mill will churn some more, but I'd put towards seeing Rolling Thunder removed, revitalized Golden Kingdom, and Drop Tower (in general) for this year.  As for 2015, we wait until the 2014 additions are announced for me to put my opinion in.

I should probably warn you guys that I make long posts...
2010 & 2014 Coaster Draft Champion
Back to Construction & Future Expansion